It’s important to realize the purpose for everyone who lives here, there, or anywhere in this world. Being able to strive for a success is important. Being able to prove that we matter in this world is so important, but why do we have to prove it to the world? It’s a question that everyone has in their mind all the time. Most people who have the luxury of earning their rewards of money have done so because they proved to the world, they matter most. However, most people who earn multi-millions or billions of money a year seem to forget where they started from and use their money for luxury beyond society’s control. They become the ones who control societies, even government. For instance, any one used to be able to become the President of the United States, but now it seems only those people with a lot of money can become President, even any government official for that matter.

When living in this world during your time, it’s important to remember what makes up a community within a society, but it’s also important to remember what makes up a life that matters to the world. Unfortunately, we do need to prove to society that we matter in this world. It’s the only way to move forward and it’s the only way to cross safely to the other side. Although getting to safety is a difficult process a lot of times. There are too many obstacles that often get in our way along our adventure to fulfill our missions. Many people do not understand what this means and a lot of times a lot of people fall into a rut or dark hole in the ground trying to climb up to the light. There are many people, in general, who don’t understand what it means to work hard for an achievement or goal.

A definition of a Goal is the object of a person’s ambition or effort. Our ultimate goal is to get to the ‘other side’, but what does that other side look like to many people. Well, to many people in the world who are very spiritual, the ‘other side’ is being one with ‘God’. To a lot of other people who don’t believe in spirituality, the ‘other side’ is just making their mark in the world. What if making your mark in the world is a part of getting to the ‘other side’? We are all here to embrace each other with support of a guiding light to ensure the flame continues. Many people do not understand that they need to pass the flame around to everyone. We all have a 100 years to live our life even though a lot of us don’t cross that 100 years of life. The most important part of our life is to cross paths with other people, make a mark to make a difference for the world, and make your generation one to remember well enough.

Don’t fall in to a rut, don’t fall in to a hole, and don’t look to be inspired. Just work hard at what you know you want to do and can do to make that difference for the world. Speak up to those people who fail you and move forward in the darkness finding your direction toward the light. We only feel inspired from our inner self when we allow ourselves to see. It’s important to see what you can do for the world. It’s important to start with small goals like waking up in the morning to your stretch arms saying to ourselves “I am going to matter in this world! I am going to reach my goals! I am winning :)” Then, we sit down at our desks at home writing or contemplating everything we want to do each day to work hard to a success. Sometimes the list can be 50 things, sometimes a lot more, or sometimes it’s only just a few things, but we need to make sure we make that list toward our success. Always remembering that each goal starts out small as tiny as getting up to organize, clean, or see friends.

Living toward our success will give us the freedoms we desire like paying our own bills, using our support network, and guaranteeing that we lived a life well served. In a nutshell, being independent and have supporting people guarantees success! Finding your niche in what you know you want to do and giving yourself something to strive for is so important. A lot of people don’t get to their niche unfortunately because they become blinded by certain people in the world. Find it, use it, hold on to it, and don’t let others influence you.

Here is something I created; just look into the center of the image and think about your goals… 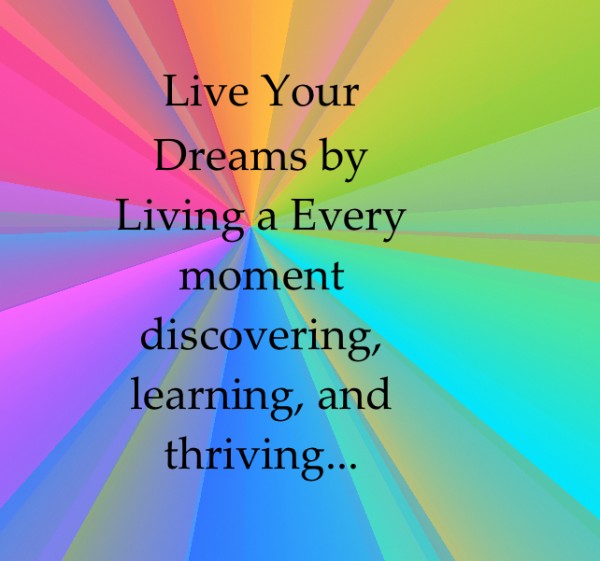 It’s almost paradise, but you can get to it!