But, who will win????  Who is the Vampire to suck out the blood, and who is the werewolf who will have that venomous bite.

Let this break the battle…

And we shall see whose curse can be broken…

The possible line up could be:

Anyway, Duanar Sanchez is showing some better sides this year and going to definitely prove who he really is. His confidence is back hopefully.

It seems like the mets could really win it all this year up to the World Series, but we shall see because we must all always stay positive. The mets got a bit slumpy last year, and may be this year they won’t do that since they have Johan Santana.

“To me, as a player, it’s just words. You have to respect Fred Wilpon’s quotes, but I’m not that type of player. I don’t believe in papers. I believe in facts, and you have to go out there and prove it.” Pedro Martinez

I trust in Pedro. Pedro is the proof of what just doing it means.  Pedro goes out there and does his all, and every one gets excited. He is a hard worker. Very genuine person.

I love the Mets Pitcher Pedro Martinez #45 for that. He is a great role model especially since he has so much in his character because he is a character, trustworthy, funny, intelligent, charismatic, straightforward guy. anything else I am missing. Anyway, He is the man to look up to on the New York Mets Baseball Team. He is the leader.

Anyway, the mets should have a captain again and I believe it should be #45 Pedro Martinez.

It would be a great honor to see him as the Captain of this team even though he has had a set back with his shoulder, he is still a champion in my heart and a role model for us all.

PS Yes, I know Pedro shouldn’t be doing stuff to live chickens in public, but that is very insignificant when it comes to this. 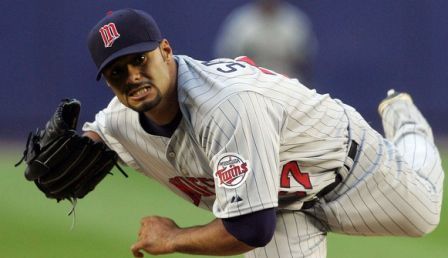 Johan Santana is a New York Met and everyone from all over is wondering what is going to be now.  The dominance of the New York Mets is immensely secure.  I can’t say how secure because security is just a superstition just like Helen Keller said.

Hopefully the 2007 season for the Mets just becomes a memory and never comes back again.

Anyway, take it easy and enjoy the life and times of Los Mets! It sounds really good and I think it is a good deal.

Just that Omar Minaya needs to think it through and discuss with his people in the organization of the New York Mets….